The piece that follows was originally published in 2008, at the time of the centennial of the first University Act that created UBC.

It was good to see the Globe praising the quality of food at UBC’s Place Vanier residence recently (11 June 2008); as the writer of the article noted, undergraduate dining has “long [been] associated with lining up at a cafeteria trough.”  That set me thinking about my own food experiences at UBC.  I arrived here in 1965, and very quickly my favourite eating place became the Bus Stop Café, a cafeteria that sat on a site now occupied by Trek Express and 99 Chairs [later to become Tim Hortons and Triple O’s].

Its name came from the first campus bus stop, a large shelter that was built in the late nineteen-twenties on the west side of Main Mall across from the Science Building (today occupied by Chemistry). 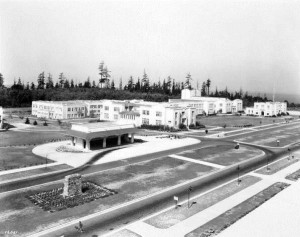 In 1945 the shelter was raised to snack bar status, with room for about sixty customers, to relieve the congestion in the “Caf” (the cafeteria under the Auditorium) caused by the increasing numbers of returning war vets.  By the time I arrived in the mid-sixties, however, the shelter/sandwich bar had disappeared; in its place, a few yards back from the Mall, stood its successor, the Bus Stop Café, erected in 1955-56 as part of a long, low building that included the Post Office and the University Bookstore, both rescued from a less desirable existence in huts. 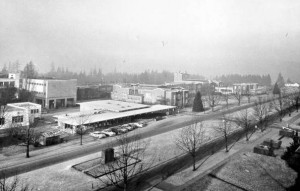 Buses continued to stop outside the Café until about 1962, when a new traffic plan closed Main Mall to cars and buses, leaving UBC, in the words of the Ubyssey, “the only university in the world that has a bus stop without buses” (September 11, 1962, p.1).  But the café kept its name, and continued to serve the UBC community until it was closed in 1990 to make way for the David Lam Management Research Centre and the eating places currently occupying the ground floor of that building.

The Bus Stop Café was hardly the most stylish eatery on campus; “cheap and cheerful” best describes it.  One half was occupied by a crowded collection of small tables with plastic table-cloths; the other half was made up of bar-like counters arranged in square “u”s.  Behind the counters, the servers worked in a kind of sunken pit, and from a distance it appeared as though the customers were being attended by a host of little people.  The place was always packed, and no wonder: the food was unpretentious but edible, the service was friendly and fast, and the price was right.  Whether they came from Newcastle or Nanking, all the servers were called Doris (at least, that’s how I remember them), and they were unfailingly cheerful and patient.  When news first broke in 1987 that the Café was to be demolished to make way for a new Commerce building, anguished customers got up petitions and wrote despairing letters to the student newspaper, but to no avail: the heartless Administration lived up to its reputation of being—well, heartless.

Today [2008], in place of the Bus Stop Café we have a would-be sports bar and a fast-food outlet; serviceable, no doubt, but lacking the kind of intimacy and slightly run-down quality that often characterize favourite student haunts.  Outside, on the spot where the original Bus Stop sat, there’s another shelter, vaguely reminiscent of its predecessor, but now protecting only soft drink machines and an ATM.  Sic transit gloria mundi….

[NB: The covered drink dispensary outside the David Lam Library (see photo below) disappeared in the course of the facelift given to Main Mall in 2012.] 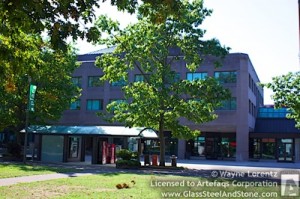